When you have a tournament in which many prognosticators are predicting that Louisville and Michigan State (both of whom are 4 seeds) will be heading to the final four, you know you have an upside down tournament in which anything can happen. Unpredictability is the only sure prediction when it comes time for March Madness and it seems like this season is going to be provide more insanity than ever. Lets take a look at the regions.

Virginia- The Cavaliers earned their number one seed by winning both the ACC regular season and the tournament. They don’t have one standout player however they have a balanced team that play’s tenacious team defense. They wont always win pretty however they have shown they can win in a variety of ways Michigan State- The Spartans are considered by many (including Vegas odds) to be the favorite to win the whole tourney despite being only a 4th seed. Their seeding does not take into account the fact that they are finally getting all of their players healthy and appear poised to go on a championship run.

Villanova- While losing in the first round of your conference tournament is not always an indicator of your teams NCAA tourney success, a bad loss to Seton Hall exposed The Wildcats flaws. They don’t have a low post scorer and rely entirely on their guards who have yet to show they can shine on the big stage

St Josephs- The Hawks won the A10 Championship by defeating VCU and only received a 10 seed. They also defeated VCU in the regular season making them 2-0 vs. VCU and yet they are a ten seed while VCU is a 5 seed. This lack of respect may motivate a senior heavy team with a good mix of inside out play to go on a run

Florida- They are the number one overall seed for a reason. Strong play on both sides of the ball and a coach who always does his best work come tourney time. Syracuse- A freshman point guard who came in without much fanfare has arguably been the nations top freshman and he combines with his more seasoned teammates to form a dangerous threat. Coach Boeheim’s zone has always been productive come tournament time.

UCLA- The Bruins are the weakest 4 seed in recent tournament history. A poor shooting team that will struggle to score for long stretches

New Mexico- The Lobos have a deep and talented roster that is balanced. If they can keep the games at their pace they are capable of beating anyone.

Arizona- The Wildcats looked like a disappointment in early December, however ever since then they have looked like the best team in the country. They are probably the most talented team in the tournament. Wisconsin- The ability of coach Bo Ryan to grind out long offensive possessions and find scores late in the shot clock and limit opponents to one shot on the other end make The Badgers a dangerous team.

Creighton- The only comparison that should be made between Larry Bird and Doug McDermott would be skin tone. Other than that they have no business mentioned in the same sentence and this Creighton team has no business as a 3 seed.

North Dakota State- they are similar to Wichita State in that they are a smaller school with many seniors and other experienced players. A strong outside shooting team is always a threat come tournament time.

Wichita State- when you are undefeated at something you are a contender, end of story. Combine that with last season’s tournament run and you have a deserving number one seed Louisville- When the leading scorer (Russ Smith) from last years NCAA tournament comes back for more you always have a chance. According to most prognosticators and Vegas odds they are more like a 1 seed than the four seed that they actually are.

Duke- Their Coach should worry less about other conferences bids and focus more on his poor shooting team that might be his weakest defensive team in 20 years.

Arizona State- The Sun Devils are a high scoring team when they are clicking on all cylinders. Which can be dangerous this time of year. There are many US friendly sportsbooks to bet on the Final Four, with the best Final Four odds at Bovada Sportsbook .
Check back for all your March Madness Betting needs and for up to minute Final Four betting odds .
Brackets and opening point spread betting odds are below. Recommend US online sports betting sportsbooks for March Madness are below. ------------- 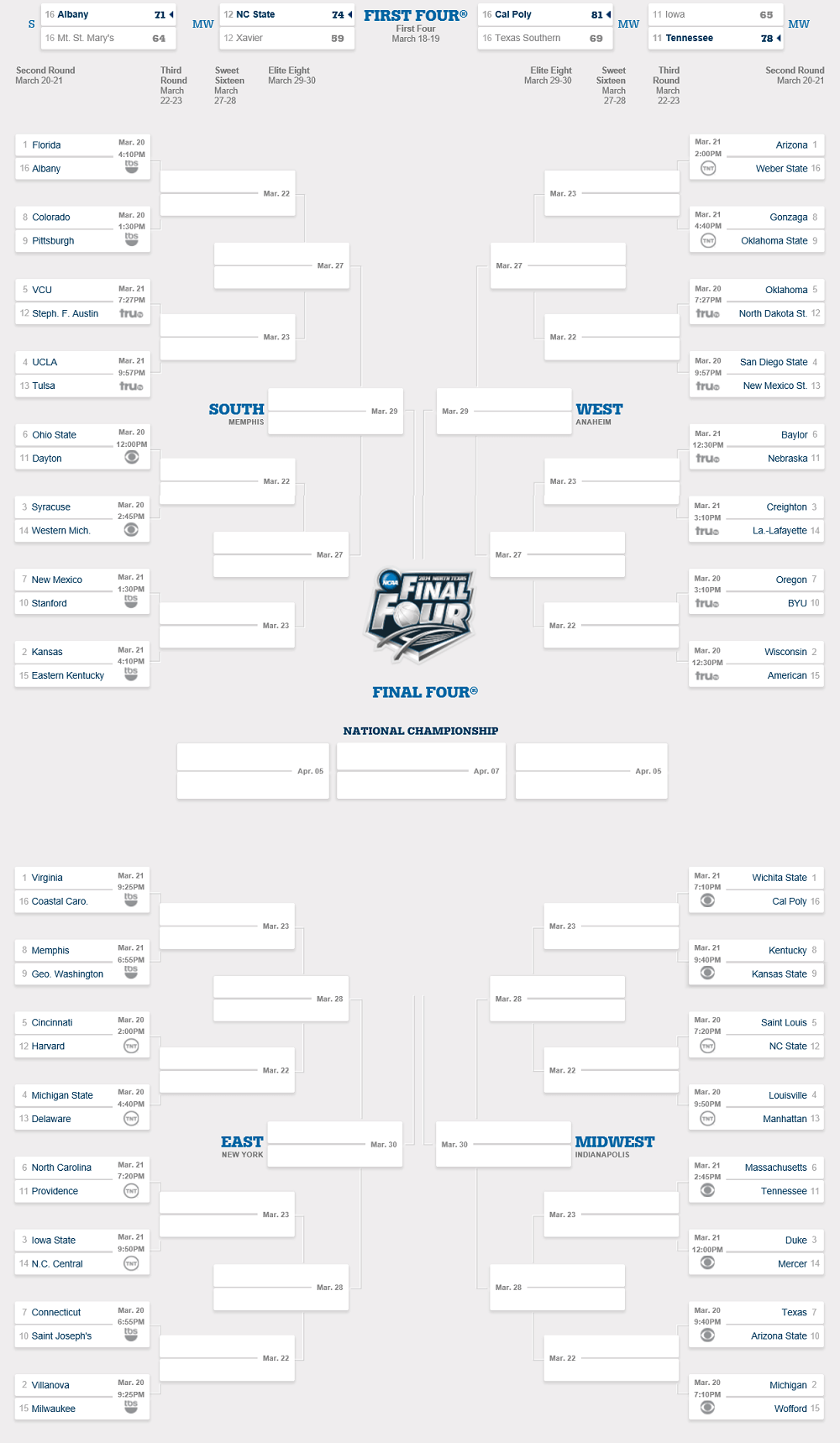